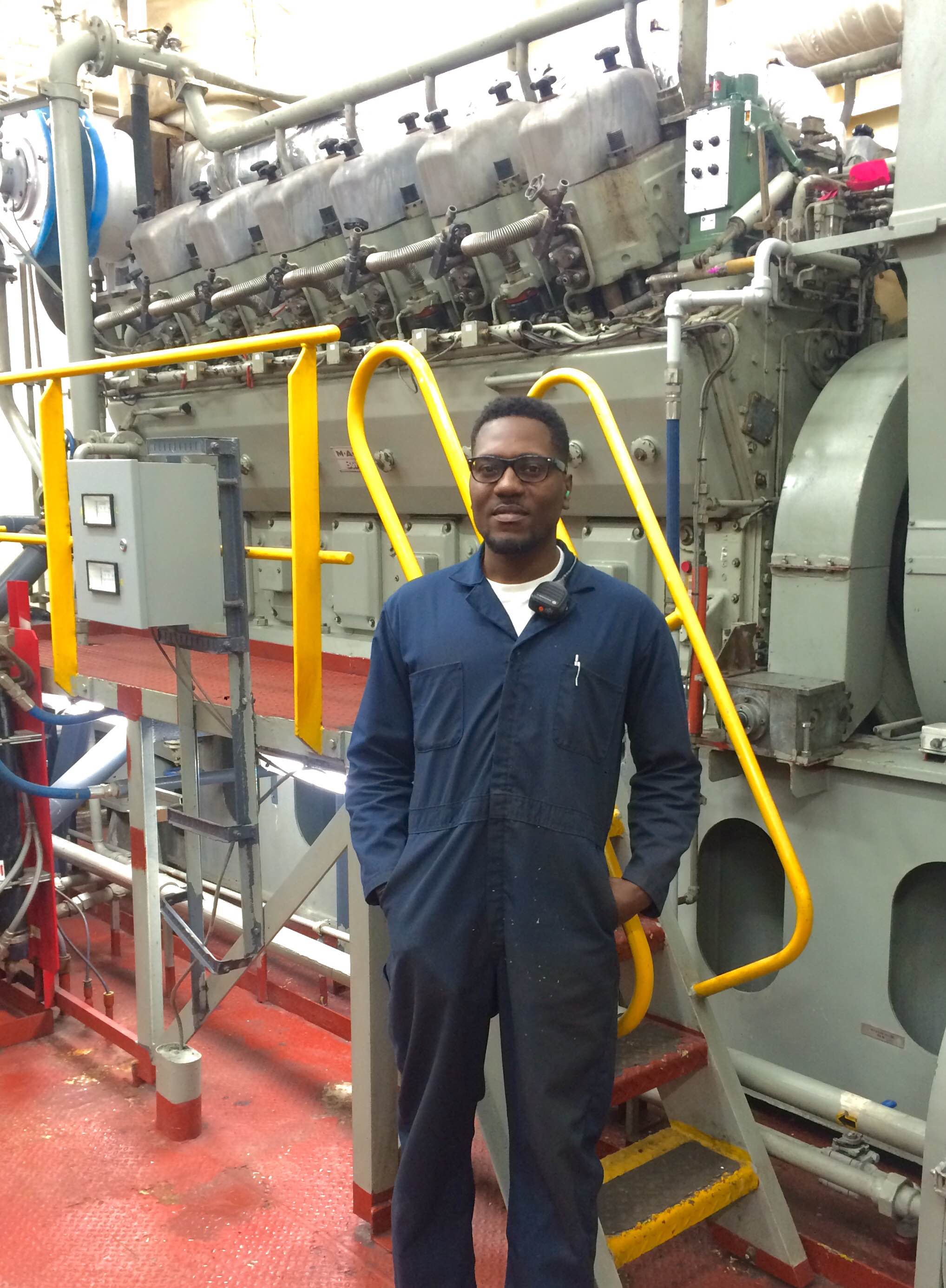 Brandon Mazyck is new to Military Sealift Command (MSC), in a way. He most recently joined in February 2016, but it was not his first time working for the company. In his own words, Mazyck describes himself and his time with MSC as “a very special case.” After Mazyck graduated college, he and one of his closest friends were having a difficult time finding employment. In 2009, at the height of the country’s recession, it was a challenge finding any kind of employment let alone landing a career. For months the pair held down odd jobs, then Mazyck’s friend learned about MSC, and they discussed the opportunity. The benefits and promise of travel appealed to Mazyck most, and in November 2010, he joined the Command sailing as a Wiper and then as an Engine Utilityman.

After three years working for MSC, Mazyck’s priorities and needs had shifted. “I started MSC not knowing a thing about ships and slowly I gained enough knowledge and know-how until that day when I decided that resigning to pursue a license at a maritime university would be in my best interest. It was not easy walking away from a well-paying job as a grown man with bills [and go back to] school with kids out of high school. But I made that sacrifice.” Mazyck left MSC with the purpose of getting a U.S. Coast Guard license. He attended State University of New York Maritime College (SUNY) and graduated in 2015 with a Marine Operations degree.

With his new licensure and memories of his first experience, Mazyck was encouraged to return to MSC as a Third Assistant Engineer. He said, “I decided to come back to MSC because I enjoyed it so much the first time around. “The first time I joined MSC, my mission was to land a solid job where I could travel and have a job that offers great benefits. The second time around I joined the outfit because I want a job that offers me a chance to start my life. I can pay off my student loans, buy a house and support my dreams with this job as a licensed engineer,” he said. “And I get satisfaction knowing that I am supporting our United States military operations.”

The time Mazyck has spent with MSC has changed him. He even credits it with making him a better person. Now, he has an increased gratitude for the things he doesn’t have while away at sea. “You know the saying, ‘You don’t know how good you had it till it’s gone?’ Well, I feel like that at sea, so when I do have the opportunity to come home, I cherish the moments when I see my family and loved ones, because I know it may be months before I see them again,” he said.

Mazyck is also appreciative of the things he has been able to experience sailing for the Command. “Since I have been working for MSC, I have been exposed to so much, it’s difficult to put into words. […] Thinking about my K-12 education and all of the history we have learned over that course of time and now, years later, I get to experience these places; it has been unreal. I never thought that I would go to Italy and have an opportunity to go to the Vatican, or to go to the beach in Hawaii, or be able to try my tenth grade Spanish in Spain. And the best part is, I get to travel for free. MSC has definitely changed my outlook on life and made me a better person, and I have come a long way.”

Mazyck enjoys the work he does, for 8-12 hours each day he dedicates himself to ensuring the ship is running optimally and is safe. His position is very hands on, and he undertakes a wide variety of tasks such as sampling oil and water to conduct chemical tests and doing engine and machinery space watches. When he is on watch, he is responsible for addressing any mechanical problems that take place. “I am the first line of defense to correcting the situation. It makes me feel good, knowing that my work is vital to keeping the ship on course and is essential to ensuring that the ship reaches its destination safely and in a timely manner… I do my best to make sure it stays that way,” he explains.

As someone who needs to encounter new challenges and continue to learn, an MSC career is a good fit for Mazyck. The work is never boring. “While you are a part of the company, you will sail on different platforms from motors, steam, and gas turbine and [the ships] also range in different tonnages.” The crews and cultures on board vary as well. “For the people who worry about having a small crew, MSC usually has crews that are about 80-120 people [total] so you can always find a friend.”

It’s true that Mazyck’s experience with MSC was not linear, but as a part of the Command, this is not so atypical. It’s an organization that allows motivated individuals to reach their career goals and helps to achieve them. In Mazyck’s own words, “If someone was considering MSC, I would tell them to forget their doubts and do it!”

Mazyck has excelled with all the opportunities provided at MSC, but he notes that none of it would have been possible without his family. “I want to thank my parents for what they have done as far as helping me to reach my goal [...] their efforts have not been in vain," he says. "I am truly thankful to have them in my life, because without my mother and father none of this would be possible.”