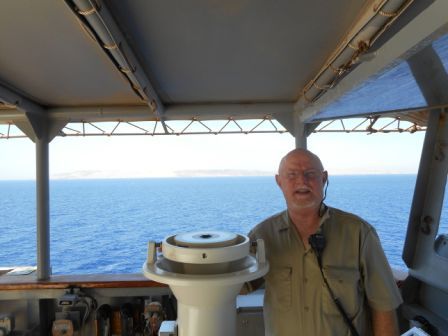 David Schirmer is a former veteran who is proud of his almost three years of service. After he left the U.S. Air Force in 1975, he went on to work in various capacities as a civilian, spending several years in heavy construction and general contracting work. Eventually though, Schirmer, who had grown up near the water, set out to learn a new skill and acquire his first commercial maritime experience. In 1984, he went to Alaska to work a duel role as a cook and deckhand, on a salmon tender.

After 20+ years in the fishing industry, Schirmer was looking for something new and different. During his last season in Alaska, Schirmer had a conversation with a Tug Captain on a Crowley fuel barge that sparked his interest in Military Sealift Command (MSC). An opportunity to sail “Deep Sea” piqued Schirmer’s interest. A career change had progressed from passing thought to reality. His first position on an MSC ship was as an Able Seaman (Watch) and the subsequent years led to Schirmer being promoted to Third Officer (Watch). It’s an ascension that he feels is one of his greater accomplishments.

The tours and ships he has sailed on have given Schirmer perspective on cultures and how others live, and because he had previously worked in commercial shipping, acclimating to life on the sea came easily with the Command. However, Schirmer points out, “Each ship has had a different culture. The USS Mount Whitney, USNS Wally Schirra, and USNS Patuxent have different missions, different crew makeups, and have different management trees. The culture and tone of operations emanates from the Master’s Office.” Of all of the years on board, “I’ve been fortunate to have nearly 100% positive, professional leadership. A clean ship, respect for shipmates, safety, and operational competence have been a common theme on every ship I’ve served on, so far,” he explained.

Being a civil service mariner (CIVMAR) with MSC has allowed him to work alone and as a part of a team, and Schirmer notes, “I find both satisfying. Working with the crew on the bow when mooring is always satisfying when 10-12 people work together making a tug line fast, passing heaving and mooring lines, and securing the ship. It’s hard to beat the accomplishment of a safely executed major “cross deck” ammo exchange with another ship over a three to four period.”

Even though Schirmer loves his time at sea he also relishes being at home. When he returns stateside a few times a year, he spends his time reconnecting with family, friends, and pursuing hobbies like playing golf, cooking, and entertaining.

That passing conversation in Alaska that led Schirmer to begin a career with MSC has subsequently led him all over the world. And he is glad he listened. Because of it he discovered lifestyle and work he enjoys and plans to stick with until he retires.