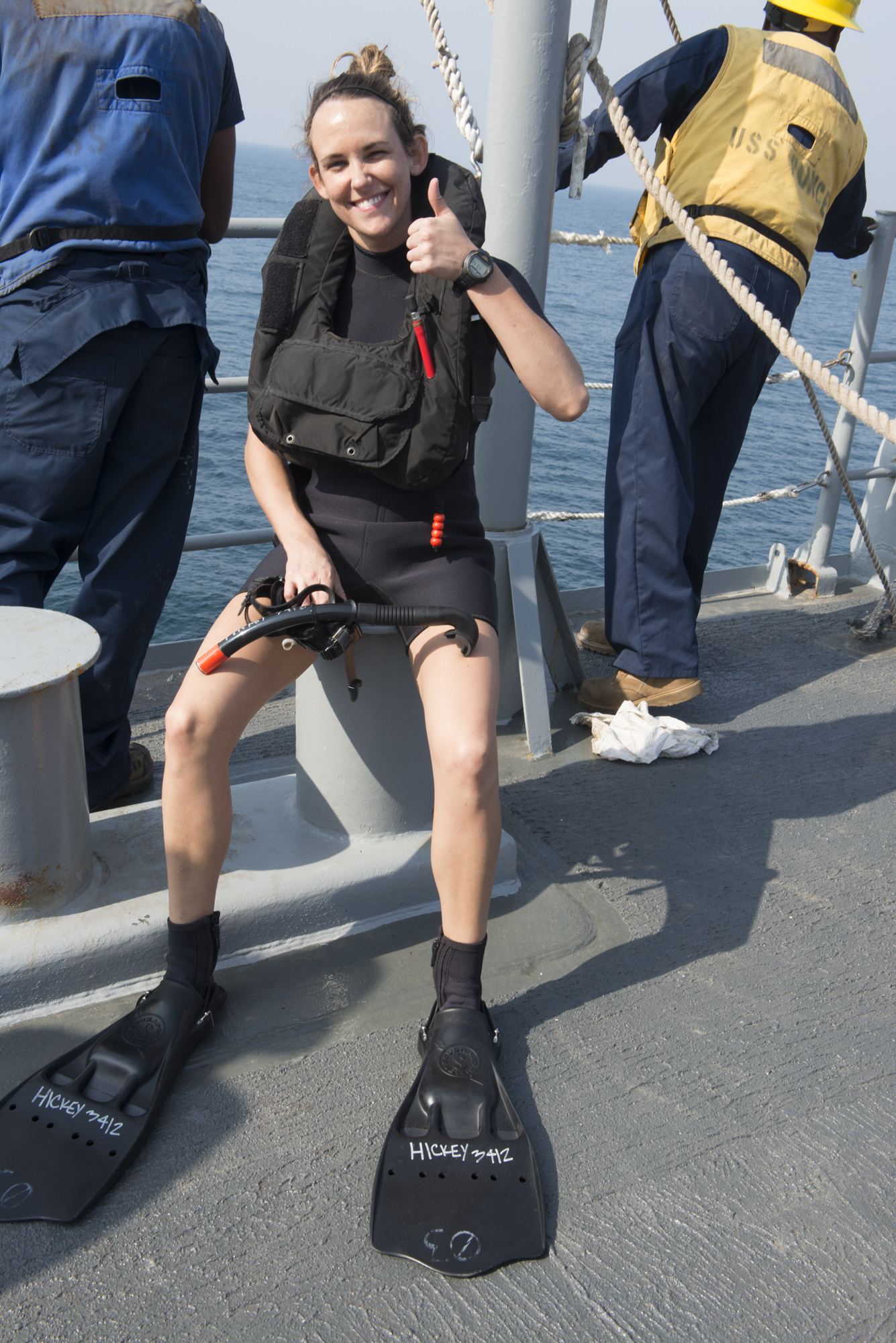 Ms. Caroline Hickey began sailing with Military Sealift Command in April of 2013 aboard the USNS Bridge, a fast combat support ship. Originally from New Orleans, L.A, Hickey was motivated to become a Civil Engineer after the levees broke during hurricane Katrina. Following that dream, she applied and was granted a scholarship to SUNY Maritime College and upon graduation applied to MSC and was fast-tracked in to her current position.

Part of Hickey’s decision to move directly into employment with MSC was the opportunities for accelerated advancement, the diversity of platforms as well as the ability to travel the world after graduation. "I appreciate how many ships are in the fleet and their various locations and missions," she said "I also am looking to upgrade my license and it is easy to do that quickly with MSC."

Though she's only been with MSC for a year, Hickey has already upgraded her career by becoming certified as a Surface Rescue Swimmer (SRS). With lifelong swimming and life guarding experience, she felt that the SRS program would be a challenge and a good use of her skills. Certification entails "a rubric of events that must be passed such as timed swims, scenarios with survivors wearing certain equipment, demonstrating how to properly release oneself from a parachute, etc.," Hickey said and "every day you're learning something new." As challenging as the process may be though, she feels it's all worth it because "when you do something so demanding as that, you learn how much potential you have."

Hickey's SRS collateral duties don’t interfere with her normal responsibilities as a Third Assistant Engineer or affect her ability to be promoted, as she is focused on achieving her First Assistant Engineer’s License. While she has the flexibility to be away from home for extended periods of time, she said, “I’d like to take advantage of that and grow as much as I can as a licensed Engineer.”

Hickey said she sees plenty of opportunity for growth within MSC. “The best part about my job is that I learn something new every day. I see something I have never seen, or do something I have never done before. Pulling into Navy bases and working alongside Navy personnel on our ship allows me to see how other departments operate,” she said. Most days however, Hickey is busy performing maintenance on the equipment in the ship’s engine room.

Even though Hickey is focusing so much of her effort towards career advancement, at this time in her life, she is also enjoying the opportunity MSC affords to travel. After departing from Indian Island, Wash., Ms. Hickey traveled by way of Guam and the Philippines to the Middle East. “I have spent most of my time in the Middle East and I’ve enjoyed Dubai,” she said “it’s filled with people from all over the world.” Between ports though, Hickey says she enjoys working aboard the ship because “you can really focus on your job and learn a lot when you’re not in port.” Living aboard the ship has its own perks too she explained, “It’s easy to make friends when you’re in such close quarters.” Noting that she does even occasionally get some down time, Hickey said “The USS Ponce has a good crew and a good balance of time in port and out.” During the two months she normally spends on leave, Hickey returns to her roots stepping out along the streetcar line that runs near her mother’s home or Zydeco dancing with her father.

As far as the future of her career with MSC, Hickey said “I see how much I have grown in the past year with MSC and am pleased with the career I have chosen.”