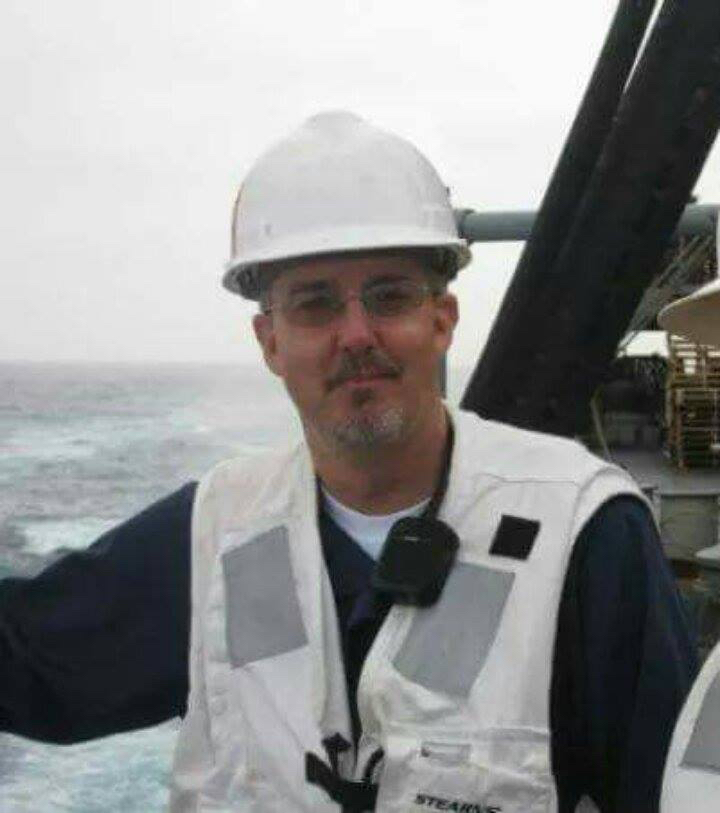 When it comes to sailing with MSC, Steven Pacheco is a seasoned mariner. He joined Military Sealift Command 16 years ago in 1998 and although he could retire soon, he won’t until he wants to. “I will sail until I do not like it anymore,” he says.

Pacheco’s career path started with the U.S. Navy but after serving four years as a Quarter Master for the Navy, he decided to make a change. Pacheco got out as an E-5 and transitioned into junior college for a few years. All through that time, his family and friends were speaking highly of MSC to him. Eventually Pacheco decided to learn first-hand what MSC was about, and to do so, he enrolled at the California Maritime Academy (CMA).

While at CMA, Pacheco sailed as a cadet with MSC on the fleet replenishment oiler USNS Guadalupe and was hooked. Upon graduation from CMA with his Third Mate’s License, he accepted a job with MSC as an Able Seaman (Watch). Because he was at the right place at the right time, Pacheco received a temporary promotion, relieving a Third Officer who had been serving on the ship, after being onboard for only three months. Although it was his first voyage, Pacheco stayed aboard for 13 months and the hours Pacheco accrued during that period were enough to make him eligible to sit for his Second Mates License.

He took the Second Officer exam, passed and in a little over a year’s time, Pacheco had advanced himself to becoming a Second Officer Navigator. From there, Pacheco continued working his way up the ranks at MSC and is currently a First Officer. If you ask Pacheco what his favorite position with MSC has been thus far, he would say Second Officer (Cargo). Of the role and experience he says, “learning a new skill set and being on deck re-invigorated my career. Being a deck day-worker, you get an appreciation for just how hard the unlicensed guys work, and how competent they are at what they do. [I’m] very proud to be working alongside those cats!”

Pacheco definitely doesn’t shy away from hard work, “I do enjoy what I do […]. It is very satisfying to me to be a part of the planning and execution of big evolutions like cross deck or a major on-loads.,” he explains.

No doubt, Pacheco is committed to MSC. But as much as he loves work, he is just as excited by homecomings and dedicated to his family. He says when headed home, “You are so excited to finish your tour…[you] spend 26 hours travelling and when you finally get home, it is all kisses and hugs. [You] get a home cooked meal and crash for about 14 hours of sleep. Then run around trying to do all you can for 30 days. Then back to work for four months, planning your next holiday.”

If you’re considering MSC for yourself, Pacheco says, “Do it! It is a great job. You will see and experience many things.” It’s the best of both worlds: water and land, striving and progress, service and rewards, love of work and time for family. Those are the joys Pacheco has found working for MSC.