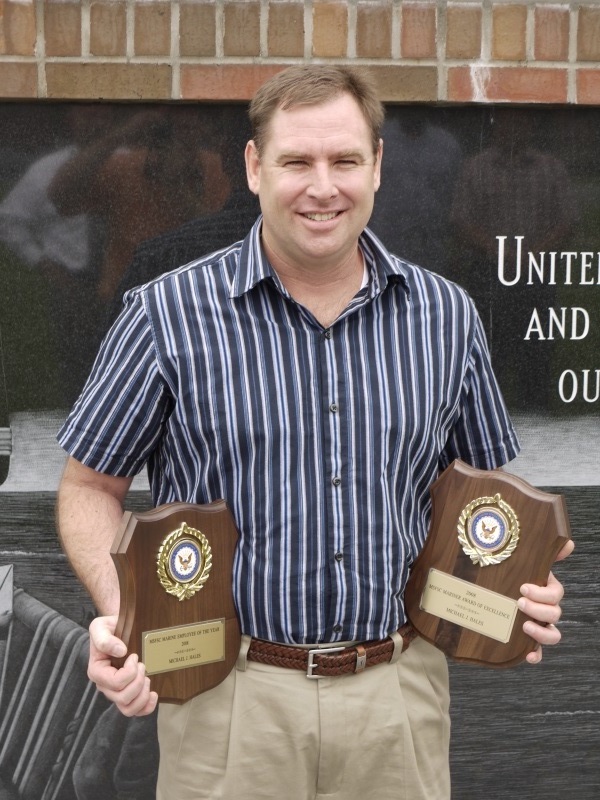 When Able Seaman Michael Hales came to Military Sealift Command, he was hoping to do something he loves: work at sea with a talented, skilled team. It’s a love he’s cultivated during a 20-year career in the Navy, and it’s work he missed after retiring in 2005.

As it turns out, not only does Hales love working at sea, he’s also quite good at it – one of the best in fleet, in fact. For his service aboard USNS Grapple, Hales was recently named the 2008 Marine Employee of the Year and 2008 Military Sealift Fleet Support Mariner Award of Excellence. “I was ecstatic,” Hales said of the awards. “It’s just unbelievable. I didn’t think I had a chance, because I’ve only been here for three years.” USNS Grapple Chief Mate Frank Wareham nominated Hales for the awards. In his nomination letter, Wareham described how immediately after coming aboard as Able Seaman, Hales took on several new responsibilities in addition to his normal assigned duties – including becoming Fire Marshal.

“His work as Fire Marshal was outstanding,” Wareham said. As part of this work, Hales set up damage control lockers for USNS Grapple, he set up spreadsheets to track inventory, and use and maintenance schedules for damage control gear. He also ordered and maintained all lifesaving and aviation equipment. It’s a big job, one normally handled by a full-time dayworker. By all accounts this alone would have been enough to earn Hales the Mariner of the Year award – but his dedication to his work aboard USNS Grapple didn’t stop there.

When new hands report to USNS Grapple’s Deck Department, they come to Hales –who introduces them to their ship and their duties. “He was chosen for this task because of his ability to translate big picture operation of a piece of gear and reduce it to the basics,” Wareham explained. “He’s not only making his part of the world better, but he’s making our people better, too,” Wareham said. “It’s simply remarkable the amount of productivity one person can have.” Hales is rightfully proud of his accomplishments, but he’s also quite low-key about it. “This is a great place to work,” he said. “I’ve learned new skills, as I could, and taken on new responsibilities – it’s rewarding to do something I love.”

Hales’ career at sea began when he realized, as a freshman at Northwest Missouri State University, that college wasn’t for him. “My mom was paying, and I didn’t want her doing that if I wasn’t 100% into it,” he said. “I was working at Bob’s IGA, and went with a buddy to talk to a Navy recruiter.” The recruiter was a submarine cook – and he talked Hales into working aboard submarines. During his Navy career, Hales worked as navigator, a job he loved, both for the technical aspects and for the opportunity to work with many members of the crew. “I love the camaraderie aboard a ship or submarine,” he said.

After retiring from the Navy, Hales returned home to Plattsburg, MO, to his wife and kids. He worked for several months at a lumber yard as a driver and a salesman – but with six kids – ranging in age from eight to 20-years – to support, he needed more stable income. And, he wanted more from his career. He missed the camaraderie of life at sea and a sense of having a real mission at work. He headed to the regional exam center in St. Louis to get his merchant mariner’s document, as an ordinary seaman, where he picked up a brochure for Military Sealift Command. And the rest, as they say, is history.

Hales describes himself as being very goal-oriented and his accomplishments prove the point. His current goal? He’s working hard, studying in his free time in preparation to take the United States Coast Guard Third Officer’s test. And beyond that? “I love to navigate,” he said. “I have my sights set on become a Second Mate, ship’s navigator.” And if past performance is any guide, he’ll get there – fast.